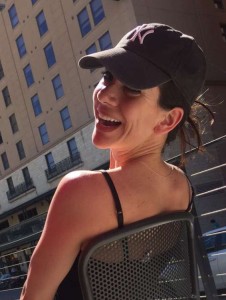 Mariana Fernandez is a beautiful, generous actor and a devoted theatergoer. She is also the mastermind behind bringing This is Fiction to Mexico City this Fall. And somehow she does it all while working 4 jobs, auditioning and tossing in a marathon or two. We’re so glad she came back to NYC and became a part of our company!

Mariana: Actor and supporter of the theatre.

Mariana: Nothing short of wonderful. I will forever be grateful to Bernardo Cubría who invited me to a play he was doing back in 2013 (THIS IS FICTION. which I saw 3 times…) and he introduced me to this amazing theatre company called InViolet. Fast forward to 2016, once I had moved back to NYC, it was Bernardo again who encouraged me to check out some readings for InViolet and to meet Angela and Michael. I believe I owe Bernardo a drink or 5 because he was always so encouraging about me keeping in touch with this amazing group. I remember I showed up by myself, but from the second I walked in, I felt that this company was different. Everyone was kind and warm and friendly… I remember talking to Michael and Angela and even though I was a stranger, they made me feel like family. I had only planned to go to one of the readings and I stayed for all four. I went to their 2nd Second Monday Social and had a blast, and a month later Angela invited me to their annual retreat and I knew I was a forever fan.

Mariana: The second time I was at Second Monday Social, I got to read a great part in Jen Bowen’s play and I met fellow company member Rob Hille. I really wanted to do a good job reading, but about two lines in Rob had to say something about coffee and java, but he pronounced it “yava” and I lost it. Everyone was laughing and I just remember I couldn’t really recover, but we all were just laughing. I realized that there would be many amazing spontaneous moments like those with this company…
Retreat is a definite highlight. I had only been back in NYC for a couple of months, but I got to go to the mountains with these cool people that encouraged all of us to direct, and write, and stage manage, and contribute. I had never done anything like it, and every conversation was open and genuine. I remember being profoundly moved by so many of the plays that were read at that retreat… I knew I was surrounded by extraordinary people and amazing artists. This year’s One Night Stand also stands out… I thought it was brave and awesome that the company took our current political climate and created these bold and thought-provoking pieces. I recently saw a reading of Bixby’s LOOK, LOOK, LOOK, LOOK, LOOK which I had heard at retreat and was so moved by his work- I am really proud of him!

I could go on and on about other moments- Clearly, I have a lot of favorite memories because each one stands out and I hold onto it dearly.

InViolet: You recently celebrated your one-year anniversary of being back in NYC. Congrats! How’s the year been?

Mariana: It’s been crazy. I left NYC for two years to go to the motherland, Mexico City, and I was excited and terrified to come back. It’s always more difficult when you know what to expect, but I can honestly say that I love NYC much more this time around. It hasn’t been the easiest transition back, but I keep embracing the challenges and am really in love with living here.

InViolet: You are quite an athletic person. Marathon-ing, Triathlon-ing, Yoga-ing…Where does this love of the physical come from?

Mariana: My family… And don’t get me started on my family or I might not stop. I think my family is made of superheroes. My siblings and I were all swimmers growing up. We all swam competitively up until college and then we started finding our own passions. Even though we didn’t become Katie Ledecky or Michael Phelps, I think we took the discipline that swimming gave us. My brother has completed of 25 Ironman triathlons, my mom has completed 2 Ironmans over the age of 60! She’s a beast- I am eternally motivated and inspired by her! Every member of my family has completed one or more marathons. So… we’ve all kept that athleticism and competitive nature as a part of us. Somewhere along the way we also found the arts. My mother is also an activist and a world-renown photographer, my older sister is an extraordinary painter, my younger sister is on her way to becoming a doctor and a beautiful dancer… My brother and father are incredible doctors and supporters of the arts too… I think I just come from a family of overachievers, that are not only super talented and hard working, but that have the biggest hearts. I am inspired by them and their achievements on a daily basis… and I am just trying to keep up.

InViolet: Talk to us about the process of bringing Megan Hart’s THIS IS FICTION, or rather, ESTO ES FICCIÓN to Mexico City!

Mariana: Oh my goodness- I am going to make this happen even if it’s my final mission on this planet! I was living in Mexico City and I felt artistically very unfulfilled. It just works very differently down there. I decided to take matters into my own hands and I wanted to do a project that had a lot of heart and that had resonated with me. I kept coming back to this moving and thought-provoking play I had seen THREE times in NYC right before I moved away. I had to bring it to life again! I got in contact with Megan Hart and I remember meeting her at a Coffee Bean in the Meatpacking District asking for her permission to translate the play and to have it produced in Mexico City. She was so kind and open– I will forever be grateful to her for taking this crazy journey for this next production. I have never produced anything and it has been the most challenging, but I hope, the most rewarding project yet. We have the money, we have the theatre, we are gathering a cast, and fingers crossed, after two years of trying to make this happen, Esto es Ficción will open in the fall of this year.

InViolet: You’ve done quite a few projects with playwright Caridad Svich. Tell us about that collaboration. What draws you to her work?

Mariana: I was able to do a beautiful show of hers in Minneapolis with Mixed Blood Theatre called CORAZÓN ETERNO  (inspired by Love in the Time of Cholera.) After that, Caridad invited me to workshop a new version of that play at St. Louis Rep where instead of Julio and Julia in the love story, it’s the story of Julia and Julia, and it became a beautiful reimagined love story. I recently did a workshop of her adaptation of The Oxcart and a reading of her play Anywhere But Here. I love getting to work with her and how every one of her plays in different and nuanced. She is prolific and supremely talented, and I love the poetry and the depth of the characters she creates. The day of my one year anniversary back in NYC was the day we did two readings to the public for The Oxcart– it had been a long week of workshops and fine-tuning things, but I just remember feeling what a gift it was to have that opportunity and that there was no better way to celebrate that one year of being back.

InViolet: Is it true you currently have FOUR jobs??? What are they? And do you ever sleep?

Mariana: It’s NYC. Rent has to be paid. I teach a badass yoga class on the UES in a super hot room, so please come and join my warriors if you ever need a sweaty yoga class. I think it’s a damn good class, and my friends are always invited. I also work at a restaurant which is my other home away from home. I work as a Toyota product specialist. I have other jobs here and there. I will sleep at some point.

InViolet: If there were an award for most supportive theater-going person, you would likely win it! You seem to make it a goal to see as much of your colleagues work as you can. We appreciate it! With so much going on, how do you do it?

Mariana: Part of my favorite things to do in life is to go support my friends and fellow artists. I know that all readings don’t always make it to production, but that doesn’t mean that the work isn’t phenomenal and that there is so much talent out there that you get to witness.
When I moved back to NYC last year, it took me two months to find a job… I was so scared I wasn’t going to last. So, I started to go to play readings because I knew I could afford them (most of them are free) and because readings of new plays are like an adult version of story time for me. You get to go and have a story told to you and you don’t have the lights or the set or the costumes… but you can imagine all of that while the actors that are bringing the characters to life. If I have a free night or a spare moment, I will always go and hear or watch another play because I feel like these writers, directors, and actors are giving us a gift of storytelling and I will always want to take that journey with them. It’s not always easy to get people to watch a reading of your play, but it really is one of my favorite things to do. I really love getting to see my friends work and be in their element.

Mariana: I don’t really know, but I will take it day by day. A summer of auditioning, working, and appreciating that I am still in NYC. I talk to my mom everyday and whether it’s feast or famine she tells me, “day by day.” A year ago, I didn’t think I would make it for a year in NYC, or that I would have InViolet as my artistic home and family, or that I would even find a job… I am grateful that I still get to call this place home and that I’ve been able to work and survive here after coming back from a very different life in Mexico. My next immediate project is getting ordained so that I can officiate my younger sister’s wedding. I am terrified and beyond excited to get to do this for one of the most important people in my life.

Instagram @marianabananaaaaaa (yes- my handle is not professional at all, but I refuse to change it because it’s very me. I don’t promote much work, but you’ll see many pictures of me with the most incredible men in my life, my nephews.)