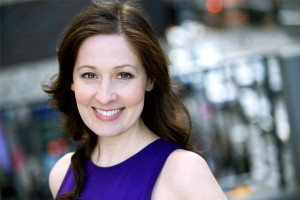 Karina Richardson is Making. Things. Happen. She’s an actor, writer and now can add film producer to her list of credentials. Plus, she’s a huge sports fan, an expert dog-portrayer and she knew fellow member Bernardo Cubria back when he had a bowl cut. Read more about her and be sure to catch her in Lia Romeo’s ENDS OF THE EARTH on June 18th and 19th!

Karina: As a performer and a writer and a self-producing make-it-happener.

Karina: It’s been warm and fuzzy! I had been an InViolet supporter for a few years and seen how supportive the company was so I was really happy and grateful to be welcomed to the company. I’ve had opportunities to perform and see my writing performed, which is super exciting.

Karina: That would be Bixby catching me singing the chorus to Karma Chameleon over and over again to myself in a dark room in preparation for performing in his play at my first retreat.

InViolet: Let’s chat about your play ROUND SHE GOES. We were lucky enough to present it as part of our Play Festival last year. What are your hopes and plans for the play?

Karina: I’ve had the wonderful opportunity of seeing the play in two positively magical readings in New York and would love to do a full production one day with my co-artistic director Kyra Lehman and our company Proximity.

InViolet: Tell us about your longtime collaboration with Kyra Lehman. What have you done together? What do you plan to make next?

Karina: Kyra and I are basically artistic soulmates who are at that part of the story where they’re like – I OBVIOUSLY LOVE YOU AND CAN’T LIVE WITHOUT YOU – but also have to like, find themselves and take a few years to learn to stand on their own two feet. We went to NYU together and met as little 20 year olds and had a theater class together and the first thing she said to me was in a sideways whisper when we were supposed to listening to the teacher and what she said was… “My dad is making a movie this summer. Do you want to be in it?” And I whispered “Totally” back and that summer I went on the first of many great adventures with Kyra (and took Bernardo Cubria along for the ride). Over the years, we have taken risks and learned and taught and danced and played for many many summers in Santa Barbara with her partner and my dear friend Ken Urbina and the rest of the members of our company Proximity and I couldn’t be prouder of what we have made together.

Kyra is about to start grad school in Chicago this fall and we are in the lovely process of figuring out what our next project will be because we are about to enter that part of the story where we get back together and ride carousels and shit.

InViolet: You are one of those glorious theatrical hybrid people, i.e. you act and you write. How do you balance the two? Does one ever win out over the other?

Karina: I am still finding my way into balancing the two. If I do too much of one and not enough of the other, I really miss the muscle I’m not using. Lately, I’ve been scratching the itch by working on projects that I write and act in to be able to do both. I also want to give a huge shout out to Rich, Intelisano & Katz, LLP and Dan Katz for being so supportive of my creative life and letting me work a schedule that allows space for figuring that out.

InViolet: You and member Bernardo Cubria go way back. High school, right? We KNOW you gotta have some fun dirt on that guy. Spill!

Karina: Omg yes we have known each other since I had braces and he rocked a bowl cut. One of my favorite memories is of him directing our Spanish class in a skit for the whole school on International Day called “Titanic en Tres Minutos.” I played Jack, our friend Perico played Rosa, Gaby played Billy Zane and Nicolas Ferreyros played the iceberg as Mauricio & Bernardo channeled Celine Dion and sang “Mi Corazon Seguira.” It was a smash hit but what people didn’t know was that behind the scenes Bernardo went full “director” on us, wore a black baseball cap to every rehearsal which was a 15 year old Texas boy’s version of a black turtleneck, barked “otra vez!” at us again and again until we got the scenes just right while waving around a copy of Artaud’s Theatre of Cruelty and taking drags off the two cigarettes that were dangling out of his mouth the entire time.

InViolet: You have a holiday play (every playwright should have a holiday play!) called SCROOGE AND HER GHOSTS. Without giving spoilers, what is the premise? Are we going to see this play at every regional theater this December and for years to come?

Karina: I do! It’s set in the not so distant future and Scrooge is a tech giantess who has created a program that can erase the memories people don’t want to hold on to. She thinks it’s the best gift she could give humanity but her sister (and a few other ladies) don’t agree. It’s a mostly female cast with a couple of dudes in it and will hopefully be in a regional theater near you this holiday season!

InViolet: You are currently playing a dog named Frankie in our InProgress workshop of Lia Romeo’s ENDS OF THE EARTH. Have you been doing doggy character work? Why should folks come see this play on 6/18 and 6/19?

Karina: This is my third time playing a dog, so I feel pretty confident in my barking abilities at this point. This time around, I’ve been getting deep into the power and agony of knowing a squirrel is cracking open a nut in the park around the corner and only I can hear it.

In all seriousness, Lia’s play is a really special and timely piece and it needs to be seen! Her writing is funny and smart and delicate and then you layer on the gifted cast I get to work with and it’s just one of those plays I’m so grateful to be a part of.

InViolet: You’ve been keeping secrets from us. You have a “super secret solo project”??? How exciting and mysterious. Anything you’re able to share about it at this point?

Karina: Haha yes! I’ve been teaching myself filmmaking by creating a short film that I wrote, acted in, lit, designed, and am in the process of teaching myself how to edit. It has been wildly messy and I’ve made a thousand mistakes but I’ve learned so much and it’s also reminding me to play. I can get very perfectionisty and this approach is also teaching me the joy of being a beginner.

InViolet: Sports! You’re a sports fan! Which sports? What team? Do you play or spectate? Are you one of those people who screams profanities and throws things at the screen?

Karina: I looove sports! I love all the sports but basketball is my favorite! I will never be able to root for a team like I root for the Houston Rockets who gave me not one but back to back NBA World Championships in my young life. My mom loves basketball and my dad is also into sports, so I grew up being a fan. I played sports growing up, but as happens, I eventually left soccer practice for drama practice and that was that for playing and it was on to just watching. I am definitely an emotional spectator. I like that I can be furious and heartbroken and agonized and watch a fierce battle where at the end of the day it’s just a game and no one died. Although I still can’t talk about the way this year’s Rockets playoff run ended and possibly may not ever (NOT WELL). I want to hug James Harden and tell him it’s ok that he’s emotional and that I love him because he plays for my team and has given me so many moments of dancing magic. I cried happy awestruck tears last year when LeBron James won a championship for his city. Sometimes I watch the last few minutes of that game because it’s one of the most beautiful few minutes I’ve ever witnessed and I got to see it with millions of people. That’s one of the reasons I also love soccer, especially the world cups. It’s such a global sport and it’s like watching gladiators battle for glory and triumph over adversity (but again without the death and the dying).

Karina: I’m on to step two of my independent film school curriculum and am shooting a short documentary about my grandpa in Puerto Rico, who is in his 90’s and still makes time to go out dancing.