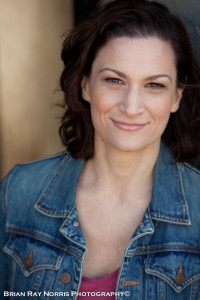 Nurit Monicelli has played it all: roles in Richard Gere and Russell Crowe movies! A kidnapping victim in a suitcase on Blacklist! An exercising starfish on PBS! She also juggles teaching young actors and mothering an awesome kid. Read all about here here and be sure to see her perform this month in our InProgress showing of Lia Romeo’s ENDS OF THE EARTH!

Nurit: Incredible! I love being in the rehearsal room creating something from the ground up. I love our Inviolet monthly meetings, where people share pages of their work. I am in awe of the talent in this company and feel so lucky to be in the room with this special group of people. I love the Monday Night Socials and the sense of community, support and humor that is being shared! I first heard about Inviolet through Marguerite and Gerry and Bixby. I saw Megan Hart’s show This is Fiction at the Cherry Lane and was blown away by it. A year and a half later I was invited to join the company. It’s been almost two years, and I still pinch myself that I get to be part of this wildly talented and generous group of people.

Nurit: Too many to name! Of course retreats are a highlight. Before I was a member, I was invited to the retreat and encouraged to bring something I was working on. As one of my many side gigs over the years I cleaned apartments and I had a lot of wonderfully odd NY encounters. I wanted to sketch out a process to develop something off of that. Angela and Michael gave me a space, two wonderful actors and let us play! We improvised a few scenarios and then presented to the company and I had a blast. It was incredible to feel such generous support, and it allowed me to go out on a limb and take a creative risk. It is that environment of collaboration and trust, coupled with fierce intelligence and talent that makes this company so special.

InViolet: You went to grad school with fellow members, Marguerite Stimpson, Gerry Rodriguez and Dan Domingues. When we interviewed Dan, we tried to get him to do an expose´ on you all, but he kept is classy. Can we entice you to give us some dirt?? What was it like training with those three?

Nurit: Those are probably the three classiest people I know so I don’t have much dirt. I will say that I met Marguerite and Gerry before they were a couple. Marguerite and Gerry fell in love in grad school. They tried to keep their torrid love affair under wraps but even though they are wonderful actors, the chemistry was undeniable and we all knew what was going on.We were in different classes (years) but all studied with the same teachers, a crazy and brilliant mix of Russians and Americans. We’ve collaborated in various ways since getting out of school: devised pieces, readings, plays, short films you name it and that’s how the friendships developed. It is wonderful to now officially be “in company” with them.

InViolet: You grew up in a house that has been described as Woody Allen meets THE ROYAL TENENBAUMS . Do tell.

Nurit: Ha! My parents have since moved to Brooklyn and I now live in Queens, so that time of my life feels like another world ago. My dad is Italian and my mom is a pianist and daughter of Russian Jewish immigrants. There are enough professional musicians in my family to make a small string orchestra, including a conductor! My parents renovated a place on the Upper East Side and I grew up in a house filled with music. We always had family and friends visiting for months at a time. We had a dog and my Dad started his press out of our home so I am used to a bit of chaos and noise. Side note: Gwyneth Paltrow (who was in The Royal Tenenbaums) grew up across the street. My brothers used to skate board with her kid brother. I was never cool enough to hang out with Gwyneth. She’d be sitting in her window smoking and looking glamorous and I’d be practicing the violin and doing my homework.

InViolet: You’ve played a wide variety of roles in really exciting projects. A role in Darren Aronofsky’s NOAH! Working with Richard Gere! Playing a singing aerobic starfish on PBS! Tell us some stories

Nurit: I’ve been pretty lucky. I had a principle role in Aronofsky’s NOAH. The scene I was in was top secret (part of a storyline that ultimately didn’t make it into the film, though somehow I did) I was a new mother and the first night we filmed was my first time away from my daughter Aila. It was an intense experience- the scene was emotionally demanding and we were filming in the middle of this fake forest in the middle of the night. Russell Crowe shook my hand and told me I did an amazing job. That was cool.

I have a small role in the Richard Gere movie NORMAN. We ended up filming my part at 3 in the morning. That night I got to watch my acting crushes Steve Buscemi, Michael Sheen and Josh Charles (among others) in action, while hanging out with Michael Kostroff (who played the defense lawyer in the Wire) and my friend and wonderful actor Yuval Boim (who has been to our Monday Night Socials!) We filmed in the Brooklyn Museum. It was a surreal night.

I once played a singing aerobic starfish in a PBS series that taught kids to exercise. That was totally weird and fun! I was also a kidnapping victim on BLACKLIST who got abducted in a suitcase. I actually had a costume fitting to see which suitcase I would best for in. That is probably my biggest claim to fame: the woman who acted her way out of a suitcase….

I became an actor so I could taste a lot of things and I’m grateful for the variety of experiences I’ve had. That said, I also like to return to plays I’ve done before. I’ve been in four different productions of A MIDSUMMER NIGHT’S DREAM (as Starveling, Puck and Helena- twice). It’s fun to have a new experience with a tried and true play.

InViolet: You teach Movement for the Actor and Acting at the America Academy of Dramatic Arts. What’s it like working in that world?

Nurit: I love teaching as it is a wonderful creative challenge and I get to connect with young actors and other teaching artists. A lot of the teachers at AADA are professional actors and directors, so there is overlap between the school and the outside world.

It is interesting to see how the challenges young actors face now compare to the ones I faced when starting out. To loosely quote Marian Seldes, I try to get them to “think less and feel more.” With Facebook and texting- social media and technology we are all interfacing 24/7, presenting our “best” selves instead of physically experiencing what we are doing, sensing what we are feeling and sharing our presence in the moment, in space, with others. It is gratifying to see a student connect and experience themselves in relation to others in this visceral and freeing way- to get past social judgments to a more open and playful/available sense of self. I learn a lot by teaching. I like to think it keeps me curious and flexible. It definitely makes me a better actor, just as acting informs how I teach.

InViolet: Tell us about your work with Blessed Unrest.

Nurit: As an associate artist, I play & train with Blessed Unrest, a physically based theater company that devises new work and re imagines classics. The theater has collaborated with Teatri Oda of Prishtina, Kosovo and AD Florent Mehmeti will be in town, so we will get to train with him. Like Inviolet, Blessed Unrest has cultivated this amazing group of artists who are committed to telling new stories. The company’s slant is physically based and I love to work with them, probably because it feels like playing music- communicating without/beyond words.

InViolet: You and your husband are both actors and are raising an amazing little girl together. What’s it like being a family of artists navigating NYC? Easy breezy, right? (kidding)

Nurit: It is a challenge! It is a dance! It is a lot of contradictory things. I am not going to lie and say that it is easy. I am grateful to our amazing friends and family who help us along the way (and who patiently wait for us to surface). I am lucky to have family relatively nearby. We live in a neighborhood that is wonderfully diverse and in a building with a great network of kids. Over the years we have met incredible people (theater artists are awesome!) and we’ve made additional friends though our daughter, so Aila is growing up in a environment that is both loving and vibrant. I cherish that. There are days when I feel incredibly connected and others where I feel isolated overwhelmed and lost (especially given this current political administration with its assault on health, education, the arts, the environment, our future!) I think the same goes for Tommy (my husband), as it can be a challenge to balance work/life as NYC parents/actors. That said my greatest joy is being a mother and Tommy is a wonderful Dad. I am growing and learning and that has impacted other areas of my life in a positive way. It is a balancing act for sure.

InViolet: Pretty soon we get to see you play the central role in InViolet’s InProgress showing of Lia Romeo’s ENDS OF THE EARTH. Without giving any spoilers, tell us why audiences should come check it out!

Nurit: I love how Lia creates a story that is rooted in relationships while examining timely themes such as global warming…. How do we sort out our personal lives and dreams as the world is falling apart around us? How do we untangle our own existential crises in a country that needs to do the same? The play is funny and moving and dark. It raises a bunch of wonderful questions that I am excited to delve into and explore.

Nurit: I am looking forward to teaching this summer, spending time with family, and doing the usual acting/teaching/mothering balancing act as best I can. Hoping to reboot, catch up with friends and see some shows!