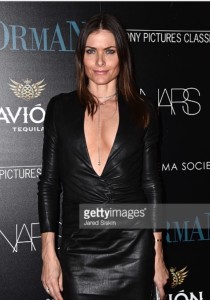 Actor and feature film producer, Tara Westwood is tearing things up in the Film and TV world. Find out how you can see her work, & let her regale you with tales of “sleeping” with seals, modeling in Morocco and the lessons she’s learned from master actors while on set!

Tara: I love to act in it but definitely have spent a lot more time enjoying it from the audience perspective. I want to do more theater, but I see a lot.

Tara: I love InViolet and every time I’m lucky enough to be with everyone I’m always in awe of the talent there. It’s been ages since I’ve attended a meeting because I’ve been focusing more the past year on TV/film stuff and seem to be working whenever we have one; our next one included, sadly.

Tara: BRANCHED, but I’m sure we’ll get into that later, so I will say the first retreat I went to. I was blown away by how close everyone was, yet felt so embraced and welcomed too. The writing and acting fed my soul that weekend and I knew that I had to become a member.

InViolet: You tore up the stage in our 2014 World Premiere production of BRANCHED as Tamara Jenkins. In the words of your onstage husband, Andrew Blair, after one particular performance: “Holy shit, Tara was really gunnin ‘em down tonight!” What was that whole process like for you?

Tara: Ha! I love Andrew, and loved being his wife. Even if he did cheat on me… No seriously, that was such a special time and I felt honored to be on that stage with such a talented group of actors and being able to play with Erin’s incredible words every night. I hadn’t done a lot of theater, so I learned a ton. We really bonded as a cast because we spent a lot of time together. We’d meet at the theater every night before the show and speed through the script which I was wildly grateful for, not just because it cemented it in my mind, but as an actor switching it up and doing it in a way you’d never really perform it can sometimes make you find a little nugget of gold that you actually keep. I remember the third day after we closed I got hit with a tsunami sized wave of sadness knowing that I had to give up Tamara, ‘Family Lap Time’, and seeing the cast and crew! I wasn’t ready to have that end. Also hearing Michael and Angela’s laughter from the audience is something that I still think of when I need a pick me up.

InViolet: You’ve had a long, exciting career as a model. Tell us about some of the cool gigs you’ve had and the exotic places you’ve traveled to for work (that IS how being a model works, right?)

Tara: Ha! I was lucky to work at a time when a creative director would make the shoot location be Morocco simply because they wanted to see it. I got to go to many parts of the world, though my one regret is that I didn’t ever tag on an extra day or two for a vacation afterwards, so many of the places I’ve been to I want to go back and actually see it as a tourist because I only saw where we shot. I think my favorite campaign that I did was for Chanel Allure perfume with Herb Ritts. I also did an elephant back safari trip in Botswana for Forbes magazine in ’92 that was pretty special…

InViolet: You, like a whole bunch of InViolet members, studied with the great Maggie Flanigan. What has your time with her meant to you?

Tara: Maggie is a pillar in my life. She has made me both a better actor and a human being. She’s made me more truthful in both ways as well… Anyone that gets an opportunity to take her master class (that’s what she still teaches) should jump on it.

InViolet: You can add Producer to your list of accomplishments after producing (and starring in) the feature film, DETOURS written by friend of the company Mara Lesemann. We’ve seen it! You were wonderful. And what a cast! Tell us about your first wild ride as a feature film producer.

Tara: Thank you! DETOURS (which can be seen on Amazon prime), and working with Mara was the perfect opportunity for me as a producer. Mara and I have different strengths and work incredibly well together, though I was also very grateful to see how many people wanted to help along the way and I learned a lot. For example, the reason why I produced to begin with is because my friend Ed Vassallo (a producer, actor and he was a member of Labyrinth Theater Company), had told me that he thought I should be working more as an actor and perhaps the way to make that happen was to produce something myself so I could showcase my work. While we were still in preproduction, sadly Ed passed away. There were so many times that I wanted to call him and ask him his opinion about something and couldn’t… Then there was a moment where I needed some crew so I looked on IMDB and saw that he had worked with Rick Rodgers recently so I contacted him and he was absolutely amazing. I can’t tell you how much it meant to me that there was this guy that to this day I STILL HAVE NOT MET, who loves making films so much (and also cared about Ed obviously), he was willing to give me advice and help us. Same with all the amazing musicians who so generously gave us their music to use.

InViolet: Tell us about THE KARMA CLUB  and your best actress nomination in The Nova Film Festival. Oh, and congrats!

Tara: Thank you so much! THE KARMA CLUB is a little independent film that I am deeply proud of and we are so thrilled that it received 12 nominations at the Nova Film Festival! I mention the budget because what they did with what they had, I realize is incredible. The script was such a blessing to work on and the whole process too. From endless hours of working with my coach Rob McCaskill on my character Regina (before we filmed), to the experience that I had on set, it was one of my favorite things that I’ve done.

InViolet: You’ve worked with some really talented, well-known actors. Any lessons they have shared with them that you can share with us?

Tara: I have been very lucky! Working with Paul Sorvino is like experiencing a master class of the Meisner technique in a day. He is so beautifully passionate about what he does, as am I, so that was especially fun. Also, I had the tiniest part on a show with Donal Logue years ago, and I had absolutely no idea what I was doing. In our scene he was walking behind me and I was supposed to be taking him to his table while speaking to him and after the first take he said to the director “Let’s do it again, I messed up!” (which he didn’t), and then very kindly and quietly explained to me the fact that the camera was on my left side, so even if in real life I would turn to the right because he was closer to there, I needed to make sure that I didn’t lose the three lines that I had on camera by turning away. It is silly but I have never forgotten that; in fact I embarrassingly sent him an email on social media years later thanking him for that. I don’t forget when someone has been kind to me or taught me something.

InViolet: Your life has become increasingly mysterious of late. For example, on two occasions you’ve posted pictures on social media of you lying on rocks beside sleeping seals. Please tell us how this occurred.

Tara: OK this question made me laugh! My boyfriend and I had been talking about how critical it is for everyone to know and understand about climate change, so when we were in California and saw a bunch of seals sleeping on rocks (knowing how many species this planet is losing), we felt very lucky. I got close (but not TOO close), enough to pretend I was sleeping next to them. We had made a silly comment about how we would rather do that than ‘sleep with the fishes.’ My kids say that he and I clearly amuse ourselves and really that’s all that was.

Tara: Yes thank you! I recently filmed an episode of BULL and that was a very special set to be on and it all starts at the top with Michael Weatherly, who was wonderful to work with. My scenes were also with Dena Tyler and she is incredible as well; she is simply one of the most generous actors I have ever experienced. I had a blast with Donnie Wahlberg on BLUE BLOODS  because he such a great guy and talented actor. Working years ago with Lucy Liu was inspiring. That woman is such a great actress and regardless of what time she has to get up, she finds time to workout and look after herself. To this day, when I think I’m too tired to drag my butt to the gym, I remember hearing that she got up at 4:30AM so she could workout before she got to set.

InViolet: You recently shot a film called BY DAWN. Tell us all about it. When and where can we see it?

Tara: BY DAWN is about a former marine suffering from severe PTSD, who prepares his family for war, as the deadline for an alien invasion approaches. I don’t yet know when it will be screening or in a festival but hopefully soon! Studying up for that part taught me a lot. I have always felt that this country needs to do more for its veterans and seeing how it handles its own who come back with PTSD, only confirmed that for me. 22 veterans kill themselves every day in this country. 22… To me that number is staggering and unacceptable and more must be done.

Tara: I am in rehearsals for a play that opens May 18 at Tom Noonan’s Paradise Factory Theater called REPRISE. It’s written and directed by Eric Maierson and I’m lucky enough to be working with Ken Forman and Sean Patrick Folster. Thank you!!!!