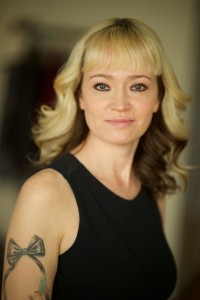 New member JJ Pyle talks solo shows, how to turn your day job into a TV gig, and that time Joe Mancuso invited her to an InViolet meeting, then ditched her.

InViolet: How do you identify in the theater?

InViolet: You’re one of our newer members. So psyched to have you with us! What’s your InViolet journey been like so far?

JJ: InVi member, Joe Mancuso is a friend of mine. We met in a Strasberg acting class taught by David Gideon. He kept inviting me to his theatre company’s things. I finally went one night because he said he was working the box office. The first play I attended was BRANCHED, written by, um, you (i.e. Erin Mallon)! It was so unique and new and the actors were so great and I just sat there wishing I were a part of it. And then I saw a reading of THE OTHER WHITE MEAT, written by, um, you! (I didn’t know they were both yours at the time.) Jen Bowen and Bixby Elliot were so believable as a cow and a pig that I laughed my face off and then cried when Bixby’s pig had to die and again I just felt like I wanted to be around these people. I think I have Tara Westwood (who I just recently met) to ultimately thank for my InVi membership opportunity. I think the story goes that she had to drop out of a One Night Stand play and Joe suggested they ask me to fill in. It was Megan Hart’s play MARY, FUCK, WILL, about a married couple on a date playing a sex game pretending they didn’t know each other. After that they invited me to their annual retreat, which was one of the most creative weeks of my life, just a week of workshopping plays and making art. I loved it, and the rest is history.

JJ: Probably my first creative meeting. Again, Joe, invited me to the company’s monthly meeting. I got an email asking if I would like to bring in any creative work. I said yes, because that’s scary, and I know if it feels scary it means I should probably do it. I submitted the first 10 minutes of a solo show I’d been working on. So I went to this meeting, not knowing anyone really except Joe. AND THEN JOE DIDN’T SHOW UP. It was basically the first time I had shared this material with a new audience. People laughed a lot. They Liz Lerman’d me as if I was one of their own and gave me so much encouragement from Day 1. I had taped it on my phone and when I played it back I could hear Bernardo laughing at my “Dad” character’s lame Mexican jokes and Shetal laughing at my “roommate’s Indian Mom” character. It may be too soon to say but at the time that made me feel like maybe this silly little story about my life might even be (entertaining?) for everyone.

InViolet: You’re a gal who doesn’t sit around and wait for things to happen. You MAKE them happen! Tell us about Gangbusters Theatre Company.

JJ: I didn’t go to college for acting. But I always did little things, drama club, plays in High School, little youth group plays at church for like Christmas or Easter, skits in pep sessions… but it just didn’t seem like a thing you could say you’re going to leave a small town and go do. And it still took me five years of living in LA to admit it before I called the Sal Dano Actors Workshop. And I only called this number because I kept seeing the sign. It was on the way to my gynecologist and therapist’s offices. We scene studied at least 4 hours a night, 3 nights a week and I still needed more. I found myself being “recruited” in a “So, are you an actress?” style by this kooky older dude who frequented the cocktail lounge (but only ordered iced tea) where I cocktailed. It was on the top floor of the Radisson Hotel in Santa Monica and it was called Toppers. (For real) He “directed” a “showcase” in Hollywood. We did scenes in front of an audience of people we invited and his “industry contacts”. And we paid him to do it. (For real) Quickly we decided that this “showcase” was too unprofessional and stupid for us and we could do it better ourselves so obviously we started a theatre company. Christian Levatino and I co-founded The Gangbusters Theatre Company, which is still going today, 15 years and over 50 award nominations later. We started producing our first show, Sexual Perversity in Chicago with $250. I am ever indebted to him for teaching me how to make theatre. www.gangbusterstheatre.com

InViolet: Now let’s chat about TILT (Tell It Like This). Great name!

JJ: My showcase scene partner turned friend turned co-founder turned romantic interest turned conflict of interest and I wanted to do different shows so I started producing under TILT (Tell It Like This) Productions. I had everyone come up with his or her own acronym for TILT and we printed them on the back of the programs. TRUST IN THE LONG TERM, TAKE IN THE LITTLE THINGS, THIS IS THE LAST TIME, TRULY IMAGINE LIVING THIS, THEATRE IS LIFE’S TRUTHS, TITTIES! IT’S A LITTLE TANTALIZING, ETC. I produced, costumed, funded, and obviously starred in IN The Boom Boom Room because my life would not go on if I didn’t play Chrissy. I was in way over my head with this one but we pulled it off to a rave review and it is still one of my biggest accomplishments to date. And then TILT collaborated with Gin Joint Productions to do Shelia Callaghan’s Scab. I would like to produce more under this name. I think it’s a good name.

InViolet: Solo shows! You’re all about them. We want to hear about “Matchgirl” and then of course HOW TO FIND A HUSBAND IN 37 YEARS OR LONGER.

JJ: I was doing a show at the Elephant Theatre’s Lab called Time’s Scream and Hurry by Paul Hoan Zeidler. It just got published last year! It was three long heartbreakingly beautiful monologues. My character was “Matchgirl”. I was on stage for 30 minutes by myself giving a seminar at an adult entertainment expo about how to get into the business of being a dominatrix. It was the most challenging thing I’ve ever done on stage. And I thought I couldn’t do it. I almost packed it up and moved back to Indiana or at least packed it up and became a restaurant manager. But I did it and it was very well received. And then we did it at The Cherry Lane in NYC. A lot of people said a lot of nice things about my performance. I was left feeling empowered in my acting and felt I could do anything. This role is what I think started my addiction to solo performance. I started studying the genre and writing a solo show. It’s called HOW TO FIND A HUSBAND IN 37 YEARS OR LONGER. I have way too much material now and am planning a full read-through momentarily in order to make cuts and finalize the script. I don’t know if I should tell you what it’s about and I haven’t come up with an official tag line yet but let’s just say in my viewing of almost 100 live solo shows there is two things I’ve learned you should not write about. Your failed relationships and your Father… I didn’t know that when I started writing it… But you’re going to want to see it anyway, it gets pretty racy.

InViolet: We are so excited for LIFE, COACHED after workshopping the web series in our meetings. Go Joe Mancuso! Go Andrew Blair! Go you! You guys have been at all sorts of festivals and are racking up accolades. Go ahead, brag.

JJ: LIFE, COACHED is what I have been most currently busy with, like I just got back from LA busy! We went for LA Webfest at Sony Studios and it screened the week before that in The Manhattan Film Festival. I mean Joe M, gets all the credit here for doing all the hard work, writing, producing and acting in, but I am so grateful that he is bringing me along for the ride. My character is Alyssa, and Jessup played by InVi, Andrew Blair, is my #fakeboyfran and he is probably the most hilarious human I know. So that’s super fun! Fun Fact: I said “fun” 3x in a 15 second red carpet interview when asked how my Life, Coached experience has been. I’m working on my spoken interview skills. But really lots of festivals, lots of awards, lots of selfie ops in fancy dresses. So it’s been really fun! LIFE, COACHED

InViolet: Word on the street is that you spun your day job in a restaurant to getting on a show on the Food Network. That’s the way to do it! Give us the scoop.

JJ: Not long after I came to NY to do MATCHGIRL, still undecided how long I was staying… #stillhere … I auditioned for a Food Network Show, 24 Hour Restaurant Battles. Thinking I would never do reality TV… except maybe if it’s food related. (Restaurants are my pretty serious day job.) A partner and I rapped with them about our restaurant experience and my idea for a restaurant concept. It’s called… & JELLY. It would be breakfast, lunch, and dessert. (No dinner) And it would be CARBS, sandwiches, French toast, pancakes, waffles with fancy butters and jelly’s, sometimes mixing the sweet and savory, like mushroom jelly and date butter. With meat and smoked fish options, of course. And We Won! I still might like to have that restaurant someday although I probably want to pay someone else to do all the work.

InViolet: You actually went to school for Apparel Design. So THAT’s why you’re so stylish! Do you still play in that field at all? How did wardrobing and costuming lead to you acting?

JJ: I did. I told my Mom when I was in the 5th grade that when I grow up I wanted to be a fashion designer. I made all of my prom dresses and my dates matching ties and cummerbunds. And I went to Purdue University for Apparel Design Technology. I should have moved to NY and FIT for fashion jobs (there was a junior year trade program) but for some reason I went from my small town straight to the sunshine and LA as fast as I could. I got that job at Toppers and then a day job with a lingerie company in downtown. I was so excited to be dying elastic by hand in tubs and bowls in the back of the warehouse to match the bra and panty samples and making presentation boards for the designers. I moved up pretty fast and even traveled with the sales teams to be the liaison between sales and design. And then a movie set wardrobing assisting led to theatre costuming for the Blank Theatre’s Young Playwrights Festival for five years. I started getting offers for other shows from that and as soon as I started, I knew I didn’t want to be shopping or sewing the costumes for other actors, I wanted to be wearing them.

JJ: a play called THE BOOKMAN by Mike Schraeder the end of May and HOW TO FIND A HUSBAND IN 37 YEARS OR LONGER reading and then get to work on the show.