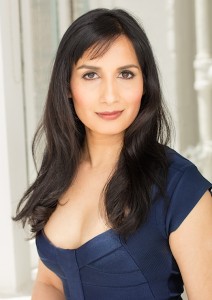 InViolet member Shetal Shah talks filmmaking, “Poetic People Power” and getting married on 12/12/12 at 12:12pm. Wowza! Read all about her here and be sure to catch her in ACQUITTAL with Pan Asian Rep this June!

Shetal: It’s funny because my acting career started on a hunch. I was a filmmaker first and my fascination with what the actors did on sets led me to just jump in and audition for a film my friend was producing. As soon as it ended, I crossed the threshold of the door into the hallway, and I knew I’d been ‘bitten by the bug’. I worked on a few films (my first ever role was as a mastermind villainess in the film Arya that you can catch on Netflix!) before I was told by a fellow actor that I needed to study with Maggie Flanigan. So I did her summer program and although I started acting later than most people do, I ended up completing her two-year conservatory program instead of jumping back into gigs because it was clear she was the real deal. I knew I’d be a much better actor studying with her. Since finishing her program, I’ve actually done mostly theater! I’m definitely a Shakespeare groupie and I’ve been given the opportunity to work with some wonderful writers, directors, and actors on stages throughout the city. I’ve made some lasting friendships and am thrilled to belong to a community of artists that I can call home.

Shetal: I adore this company! Every time I’m lucky enough to work on an InViolet project I am blown away by the talent and heart in the room. Not to mention that every single person in our company is super interesting and down-to-earth. I can see the company moving and expanding in new directions and I’m excited for the art we’re going to create as a result.

Shetal: Just one? I remember working on Megan Hart’s GATED, directed by Maria Goyanes. I was in awe and felt like a kid in a candy store that we got to rehearse at The Public! During a break at one of our rehearsals, I teased Megan about a big bag of ginger candies she had open in front of her on the long table she was sitting at next to Maria. Now, I love chewy ginger candies, so when she offered to share them, I immediately snatched one out of the bag, grateful for the spicy sweet joy it gave me, not thinking about too much else. Not two weeks later, Megan shared with the company that she was pregnant with her second child, and I was like, Doh! No wonder! She had morning sickness and I had no idea! She’s a good secret-keeper, that Megan Hart is. Or maybe I’m just really distracted by candy.

InViolet: Like our members Juan, Otoja and John, you were born and raised in NYC. Which part? Is your family still here? Has your particular neighborhood changed a lot?
Shetal: I grew up in Queens and Long Island. My parents came from India when my mom was pregnant with me. They decided to live in Queens because a couple family members already lived in NY. In Flushing and Jackson Heights where we’d lived, there were other Indians and ethnic neighbors but once we moved to Long Island, we were the only Indians in our town. I remember taking car trips back to the Indian grocery store in Jackson Heights, my parents finding innovative ways to cram the trunk of the car with huge bags of basmati rice, vegetables and mango puree! These days, the town in Long Island where I grew up has evolved into another Little India! It’s crazy to me how it went from a predominantly Irish and Italian town to a blend of many cultures and ethnicities. Lucky for me, there are two Indian grocery stores there now, so when I visit my parents, I don’t have to bring my wheelbarrow to shop.

InViolet: Let’s chat about your films! You’re currently working on writing your second feature film. What can you tell us about it? (PS- has your first film been made??)

Shetal: Yes! I am working on the second draft right now and plan to shoot it this year. It’s a character based independent feature about a woman of color whose psychological trauma leads her to become homeless. Clearly, it’s a comedy. The journey so far has been eye opening. The script was accepted into the NY IIFF (New York Indian Independent Film Festival) last year and we were able to read an excerpt to an audience. Their response overwhelmed me in that I was humbled and inspired by how many people came up to me afterwards to share their own stories of family and friends similar to the main character.

InViolet: What has been your favorite project to work on as a filmmaker so far?

Shetal: I was hired to create a video for United Nations Volunteers. After my supervisor discussed the theme and style he wanted, he gave me full creative control, which was amazing! We both were keen on shaking up the usual, as far as UN videos go. With a teeny budget, a lot of hard work and a month’s timeline, I was very proud of what I’d made for them. A fun fact is that you can see and hear three of our very own InViolets, past and present, in the video. It’s a spoof on a film trailer that makes you first think the video is about the next superhero blockbuster or action flick, but then it flips to reveal that the real heroes in our world are us mere mortals, as volunteers. The folks at UNV were wonderful in that they got the video featured at a festival in Bonn, Germany. I was able to attend and had a blast getting to know that city. The link is below if you want to take a peek.

InViolet: You are a poet! For those who aren’t familiar, chat with us about POETIC PEOPLE POWER. And what was the scoop on the poet-theater piece you premiered at the Human Rights Arts Festival this past March?

Shetal: I love P3, as we fondly call it! I’ve been a member for the past 14 out of the 15 years it’s been around. Founded by Tara Bracco, it’s the only group to combine poetry and activism through yearly shows on social and political issues that then provide a mix of resources for the audience to walk away with. My favorite part of being a poet is the intimacy that breaking the fourth wall creates between myself and the audience. There’s something special about being able to look them in the eyes and share a moment with them.

We were thrilled when the Human Rights Art Festival asked us to perform because we got to create a new type of show that infused theater elements with traditional poetry performance. Each poet wrote a piece about a social issue inspired by real stories. I wrote about honor killings taking place in Great Britain because it’s not a place normally associated with that. We were all so nervous but excited to premiere our new show format. We were given a sweet Saturday night time slot and ended up with a full house. The icing on the cake was the standing ovation we got once we finished. It was probably one of the best experiences I’ve ever had as an artist.

Shetal: Ha! Yes, it was! Well, my husband is from Italy and my background is Indian, which makes for a huge wedding, so naturally, we went to City Hall. When we got there it was like a rave with 700 people there to also get married! We were waiting with friends and family like everyone else, chatting and having a blast getting to know the other couples. Although it was the novelty of the date for many couples, we chose 12/12/12 for personal and astrological reasons. But by the time our turn came, wouldn’t you know, it was exactly 12:12PM when we said our I do’s! We couldn’t believe the coincidence! We had hired a photographer but not a videographer so the clips we got from the news media were a treat!

InViolet: What is this play with an all-female cast you’re about to start rehearsing?

I’m thrilled to be part of this production where the director and actors are all women of color and the story is based on true events. ACQUITTAL, presented by Pan Asian Repertory Theatre (www.panasianrep.org) focuses on four women in a Pakistani prison during the 1980’s and how they unite in solidarity to overcome injustice. The play was inspired by the playwright’s own imprisonment as young man. We perform June 10th through 25th in Studio Theatre at Theatre Row. For tickets go to bit.ly/acquittal2017

InViolet: Word on the street is you have a fancy new website! New headshots! New reel! Shetal means business;) Where can we find all this gloriousness?

Shetal: I do! Thanks for asking. Please visit me at www.shetalshah.com.