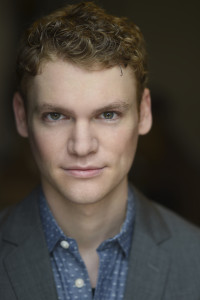 It’s been quite a week for InViolet member and napping scientist Peter Graham. He had a birthday! His episode of Law & Order: SVU aired! His scene was cut from a Robert DeNiro movie! But don’t worry about him too much, now he’s about to fly to Jamaica courtesy of Ellen DeGeneres. Trust us, you want to learn more about this talented, hilarious dreamboat.

Peter: I joined a few years ago after being asked to do an InViolet workshop of Darren Lougee’s HOSTIAS. I was still relatively fresh out of college and I remember it being the first time I did a play where everyone played age-appropriate characters. Like…I was 17 and Tara and Tim were my (obvi, still young, but biologically conceivable) parents. That was really exciting. Added a new layer of reality I’d never had before. I was also in the initial and extended workshops of Bernardo Cubria’s THE JUDGMENT OF FOOLS, which was one of the scariest shows I’ve ever been a part of (in a great way), and I’m not just talking about the face makeup. Sometimes it feels like InViolet is a niche part of my life, but when I reflect on the entirety of what my career has been thus far, 90% of the non-InViolet work would never have happened were it not for the people I have met in this company.

Peter: Reading/crying through Bixby Elliott’s SOMMERFUGL with Aubyn Philabaum at my first retreat. Hearing my short film Manny aloud at a retreat. It was one of the first things I’d ever written and the whole company was remarkably supportive and encouraging.

InViolet: You are a very skilled and scientific napper. Teach us your secrets.

Peter: Happy to help. Rule 1 is science. Never nap for more than 25 minutes. If you do, then you have to commit to a full hour and a half. You want to stay in the first and second levels of your REM cycle, otherwise you’ll be groggy when you wake up. Rule 2 is my personal philosophy. You have to be ready to end your nap the moment you feel refreshed. It could be two minutes, but if you feel good you need to get the fuck up. It’s called a micro nap. If you luxuriate in it you’re going to go to level 3. Never go to level 3.

InViolet: So, you are a relatively new resident of the The Los Angeles. First of all, we miss you. Second of all, we’re proud of you. Third of all… are you loving it? Are you constantly in the car eating avocados? Give us the scoop on your new life out there!

Peter: I am loving it! It wasn’t a business choice at all. This industry is tough on either coast and I felt like I could be a happier person over here, and while moving across the country and starting over is never easy, I have no regrets. I’m about 7.5 months deep and it’s finally starting to feel like real life and not some strange alternative fantasy I’m in. I’m right by Griffith Park and being surrounded by mountains has been the kind of soul candy I needed after 8 years in NYC. Avocados have been eaten in mass quantity, but not yet in the car. Will keep you posted on that.

InViolet: By the time this interview posts, your episode of LAW & ORDER: SVU will have aired, on your birthday no less! (5/17). Please tell us you ate birthday cupcakes while watching yourself play the victim of a horrible crime. Also, you move to LA and THEN start working on Law & Order?

Peter: Weird, right? If by cupcakes you mean pizza and by victim you mean suspect, then you’re 100% right! I was actively auditioning in New York for four years and was never even offered an audition for SVU. Then I moved 2800 miles away and they were like…hey…wanna do SVU? I play Brad. Brad is having a rough night scoring ladies (I know, right?), and an even rougher morning when Detective Rollins and Detective Carisi show up investigating an assault. DID BRAD DO IT?! You’ll have to watch. It was surreal and fun and great. It should be on Hulu by now if you missed it. The ep is called “Conversion”. Season 18, Episode 19.

InViolet: You are in an HBO movie! It comes out tomorrow (5/20). What’s THE WIZARD OF LIES all about? What’s your role?

Peter: Ha! Yes. I WAS in the movie. Let me hit the backspace button a few times because, no joke…AS I was writing my answer to this question I got an email that the scene I was in has been cut from the film. Welcome to the joys of Showbiz! But I’m still proud to have been a part of it and think it will be a great movie! It’s about the Bernie Madoff scandal and the downfall of his ponzi scheme. Robert De Niro plays Madoff. My scene wasn’t with him but I did get to work opposite Lily Rabe and Nathan Darrow. Barry Levinson directed it and he’s like…got an Oscar. So that was all pretty cool, regardless of the me-not-being-in-it-anymore part. These things happen.

InViolet: Peter Graham has entered the world of standup. You usually have us all laughing our asses off, so this makes sense. How did you start? How are you feeling? We hear there’s a video we can seeeeee?

Peter: Ahhhhhh! Yes. I did. It was all on a whim really. My friend Lori had taken a standup class she really enjoyed and I, very late one night (and probably under the influence of alcohol), signed up for the class myself. It was terrifying and mysterious at first but I ended up enjoying the class a lot. It ended in a big showcase at Eastville Comedy Club and the show was one of the more insane experiences of my life as a performer. I never thought it was going to go TERRIBLY, but I figured I’d do it once and then move on. But it went surprisingly well. Way better than I anticipated. I walked off stage shaking with a brand of adrenaline I had never felt before. I have been slow to get back in the water now that I’m in LA, but I do plan to. Link to part of my Eastville set is below. Ahhhhhhh!

InViolet: We want to hear about this television pilot you’ve been writing. Spill, please.

Peter: Very excited about it! I’m co-writing it with my pal and partner, Laura Jordan. It’s a television adaptation of the web series she and I did together for two seasons, OTP: ONE TRUE PAIRING. We’ve been retooling it into a pilot for almost a year now and it’s gone through many changes since then. We’re really happy with what we have now and it’s been a very fun process (Ok, like 89% fun and 11% wanting to bang your head through a very thick wall). A couple of fancy people have already expressed interest in reading it when we’re done, so we’re trying to wrap up the writing part in the next month or so and move into pitching.

InViolet: Alright. What the hell. How are you going to Jamaica courtesy of Ellen DeGeneres???

Peter: My sister-in-law had gotten tickets to the Ellen show back in November and brought me with her. Our whole audience ended up getting invited back a week later for one of her 12 Days of Giveaways shows which, if you’re unfamiliar, is the Ellen equivalent of Oprah’s “YOU GET A CAR, YOU GET A CAR, YOU GET A CAR”. We got a lot of nice things, which was topped off with an all expenses paid 6 day/5 night trip to Jamaica for two! My boyfriend and I leave next weekend! We’re like…a little bit excited.
InViolet: What’s next for you?